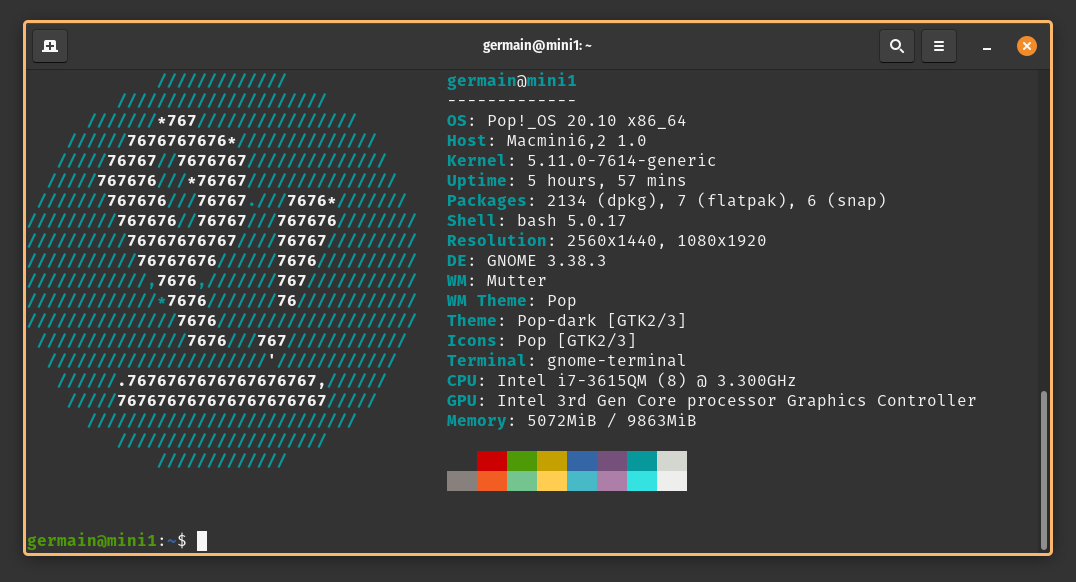 Pop!_OS is an Ubuntu-based Linux distribution developed by System76, a Linux-powered PC manufacturer.
It is such a great distribution to me, that after 6 hours of use I just bought a brand new computer from them!
It’s time to retire my Late 2012 Mac Mini anyway.

Here I am posting some settings to remember when my new box arrives.

Sidenote about the shopping process: streamlined BTO form, useful e-mail confirmation with next steps, phone call < 2 hour later to anwser my question about EU plug. Yes, people are actually still assembling computers outside Shenzen, and they are friendly. They even wished me a good week-end 🥲

I wrote dedicated posts on the following topics:

Checking your current version and configuration

To get an overview as displayed in this post banner, just launch the command: neofetch

GNOME is the desktop environment on top of Ubuntu.
It comes preinstalled with many extentions, one can see them and explore new ones at https://extensions.gnome.org.

Simply put, Dash to Panel remplaces the Mac Os-like top tray bar with a Windows-like Start Menu + Taskbar + Systray. Last time I tried Ubuntu in early 2018 its desktop environment did have a task bar. I don’t know why they changed it to a Mac-like Dock.

Right click on the Taskbar to open DTP Settings:

DTP has so many options! Coming from Windows 10, it’s like coming out of jail. Coming from OS X it’s like paganism. My choices are:

Please note that I am using the system in French. English labels may be different than my on-the-fly translation.

Pop Shell is described on GitHub as the keyboard-driven layer for GNOME Shell which allows for quick and sensible navigation and management of windows. I could only find one way to manage it: going to https://extensions.gnome.org/local/. There I activate the « Snap to Grid » option which mimics what can be done on Windows using tiling/snapping softwares such as MaxTo (which I love).

I’ve tried many plugins to control screen brightness without actually changing screen settings, only this one works: https://extensions.gnome.org/extension/1625/soft-brightness/

Linuxly speaking, Gnome Tweaks are not extensions. As far as I understand, it’s a set of native hidden settings, and the Tweaks package reveals them. Like Onyx on Mac. Do you recall Windows Plus back in the nineties?

It will install a new Tweaks app in the launcher:

There are many options, I’ll only focus on my settings.

Reminder: this is my setup, not a universal advice.

As explained in Capture, annotate, share screenshots with Shutter on Pop!_OS 20.10 (Gnome 3.38), I start by disabling all screenshot-related hotkeys and put my own for Shutter.

System76 could have saved the cloud stuff however.